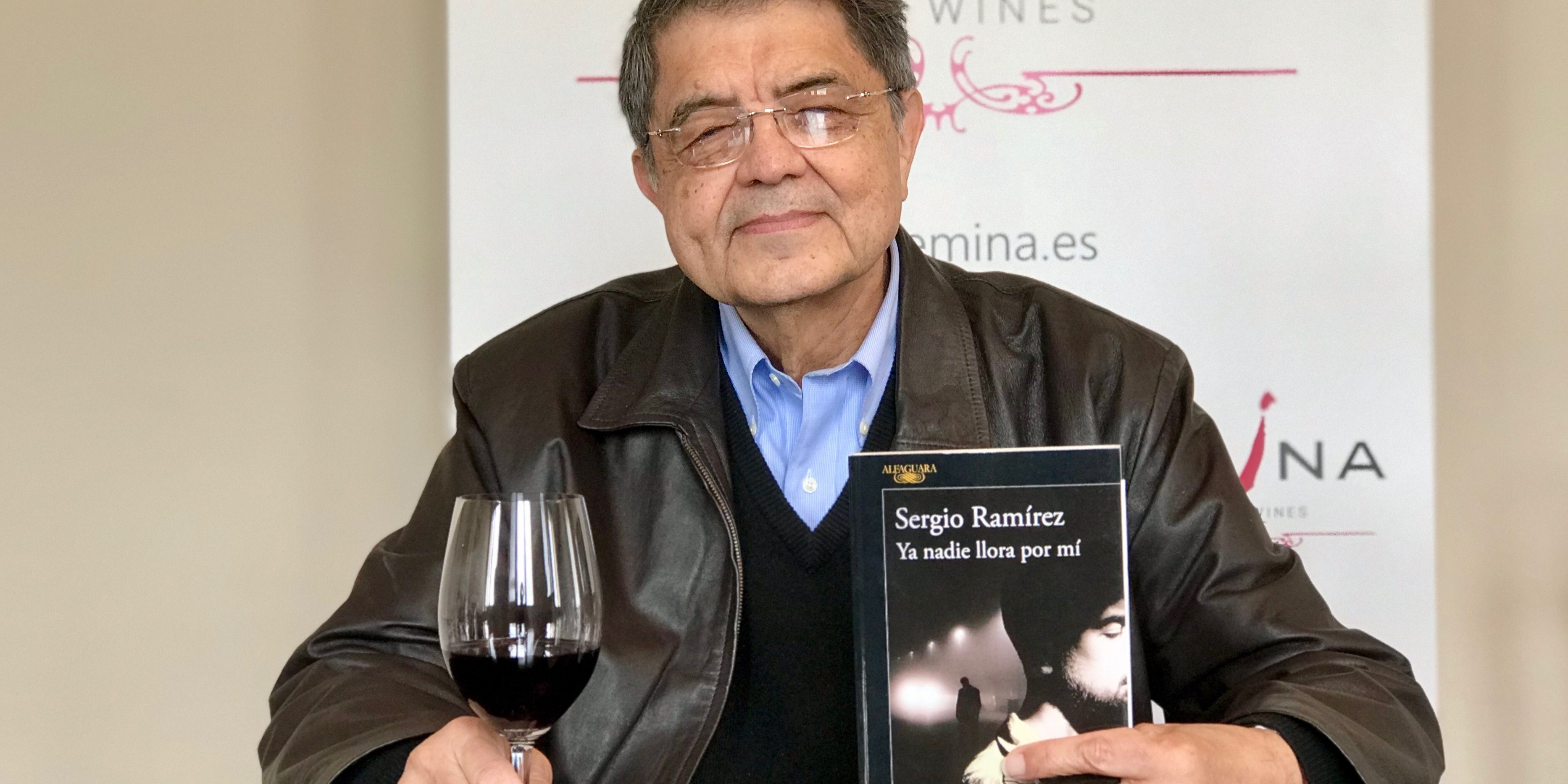 Sergio Ramírez, the latest winner of the Cervantes Prize, was the most important figure in attendance at the ‘Literature and Wine’ event which was organised by Bodegas Familiares Matarromera at the company’s headquarters, Bodega Emina Ribera del Duero. During this literary event, which was also attended by Rosa Villacastín, a writer; Cris Gabarrón, president of the Cristóbal Gabarrón Foundation; Mar Sancho, writer and general director of cultural policies for the Council of Castile and León; and different regional media directors, attendees reflected upon the latest work by this writer: “Ya nadie llora por mí” or “Nobody Cries For Me Any More”, a noir detective novel.

The event began with the visit to the winery, stopping at the Variety Garden, the Wine Museum and the different production areas. The visit was then followed by the literary discussion. Attendees had the opportunity to discover the secrets of Ramírez’ novels and exchange opinions with the author, who explained that his latest work is “a contemporary novel which seeks to reflect the atmosphere in Nicaragua at present and which is drawn from the events that are currently taking place in the country”.

Sergio Ramírez went on to say that he felt “extremely honoured to receive this award from my friend Carlos Moro. It is an honour to put this final flourish on my journey through Spain with a wonderful combination of literature and wine at Bodega Emina”.

Regarding the latest events taking place in Nicaragua, the writer explained that: “I don’t consider myself to be someone who chronicles the history of my country. I am a novelist, and it is still too early to try to write about about present-day events that are only beginning to unfold”.

This is the fourth edition of the meeting, which has cemented its place as a reference event with such highly-esteemed participants as Carmen Posadas, Juan Manuel de Prada, Rosa Villacastín, Lorenzo Silva, César Antonio Molina and Mercedes Monmany.

Carlos Moro, on behalf of the Board of Bodegas Familiares Matarromera, presented the Nicaraguan writer with the Matarromera Golden Insignia in recognition of the immense contribution that Sergio Ramírez’ work has made to the history of Hispanic literature and in homage to his literary excellence.

The prize was presented at the Bodega Emina Ribera winery itself, located in Valbuena de Duero, and the Nicaraguan writer, politician, journalist and lawyer was able to take a tour of the facilities.  In the words of Carlos Moro, the founder of Emina, “our land, and the wine that is born of it, should recognise professional figures such as Sergio Ramírez who have made their mark on world literary history. Wine, like literature, is also a faithful reflection of our history and our histories”.

Sergio Ramírez himself stated that “I am proud that a winemaking company which is so highly-renowned on an international level has extended this invitation to me, an invitation which combines the arts of wine and literature. It is an honour to receive this insignia, and it will remain in my memories and close to my heart when I return to my country. The wines that I will enjoy from now on will bring all of these memories back to me”.

The Matarromera Golden Insignia is the highest distinction awarded by the Valladolid winemaking company to personalities in the fields of commerce, politics, gastronomy and culture who make an outstanding contribution to the development of a region or a country or the growth of a particular industry.

The latest figures to receive this recognition have been Javier Angulo, the director of the Valladolid International Film Festival; Roberta Lajous, the Mexican ambassador to Spain; Tomás Burgos, the Secretary of State for Social Security; and Óscar Puente, the Mayor of Valladolid.

Sergio Ramírez Mercado is a Nicaraguan writer, journalist, politician and lawyer who served as vice-president of his country for five years. His is also the founding president of the ‘Centroamérica cuenta’ literary event which has been held in Nicaragua since 2012. He is the first Nicaraguan and the first Central American person to be awarded the Cervantes Prize.